The weather was gray and rainy most of our days there and the only time the sun came out was on our last day when we were about to go home. How nice! But it wasn’t as bad as we thought. Besides, we’re in Palawan! One of the top island destinations in the world! And we got to see the famous Subterranean River!

After thorough research on all the hotels and B&B’s in Puerto Princesa, we have chosen to book in Puerto Pension. It is not the most luxurious place in town but it is definitely one of the best Puerto Princesa can offer.

Things we loved about it: 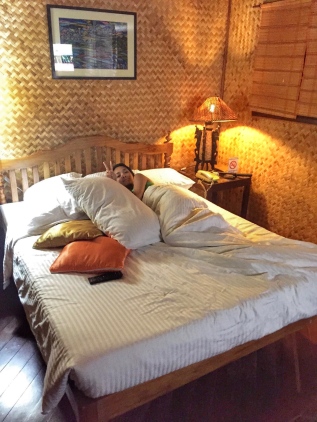 Since we arrived early and we had the whole afternoon to ourselves, we might as well do something productive. City Tour! (It was drizzling the whole time we were on the road)

First stop. MITRA’S RANCH. This is where you can have a bird’s eye view of Puerto Princesa. 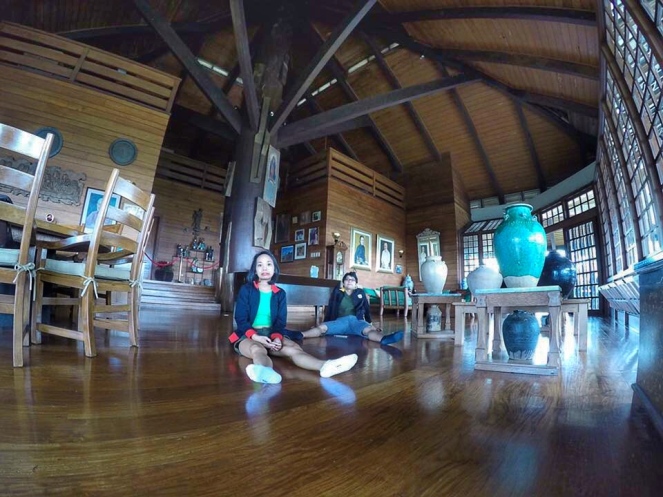 Second stop.  BINUATAN CREATIONS.  This is where weaved products such as table runners, place mats, bags and more are traditionally made.

Third stop.  PALAWAN WILDLIFE RESCUE AND CONSERVATION CENTER. It houses some of the largest species of crocodiles in the country. It also breeds new ones. 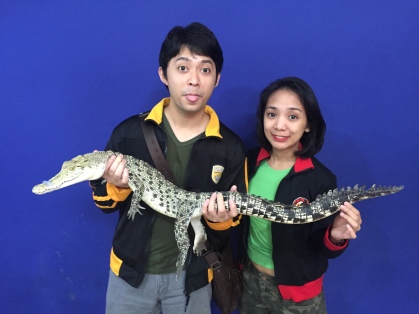 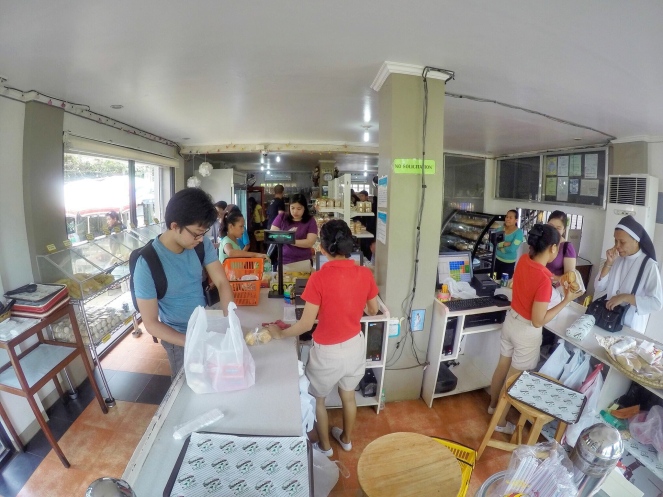 Fifth stop. I forgot the name but it was a pasalubong center that offers mediocre products. Yep, you heard me. Stick to Baker’s Hill for good quality ones. (No picture)

Last stop. IMMACULATE CONCEPCION CATHEDRAL. The church was beautiful inside and out, very reminiscent of the old days. Unfortunately, I wasn’t able to take a picture or I might have deleted it on my phone.

We got back at the hotel an hour before dinner… To this beautiful view!

KINABUCH! It was a huge open-air restaurant packed with mostly tourists.  We have heard good things about the restaurant so we went there on recommendations.

It was a nice place to chill. But… That was it! We can’t say the same thing with their food. The only dish we enjoyed was Croc Adobado. Everything else, nah-uh! I know we may have ordered the wrong ones. Still, it wasn’t worth the hype.

Day 2 was supposedly for our Underground River tour but it was cancelled due to heavy rain last night. It was still raining the following morning we thought we’d get stuck at the hotel the whole day. Sigh.

Thankfully, the heavy rain turned into a drizzle 30 minutes before our scheduled pick up. Yay! But we took the Honda Bay Island Hopping tour since it was relatively safer than the UR tour given the weather.

On the way to the port, we stopped at some shop where we rented snorkelling equipment (mask and aqua shoes) and bought bread for feeding. They were reasonably priced given they were clean and sterilised, as per our Ate Tour Guide. Although I thought they were already included in the price that we paid for aside from the free lunch buffet.

Anyway, here we were on the way to…

First island. STARFISH ISLAND. The first thing I noticed when we got off the boat was, there were a lot of mangroves in the middle making the island look small. Second, I was expecting to see a great number of starfish but there were none in sight! A bit odd. 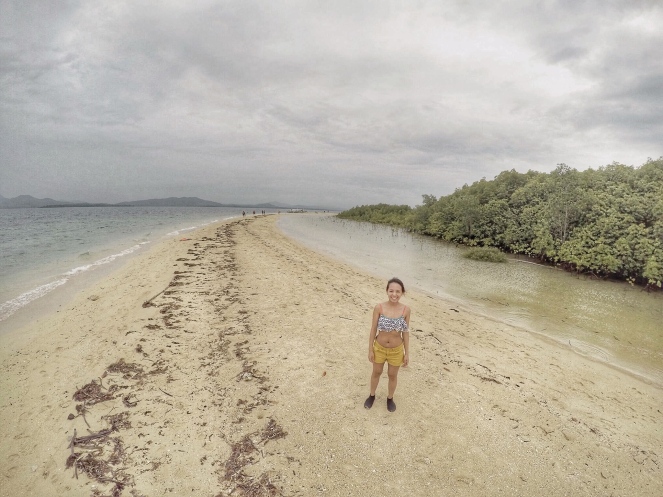 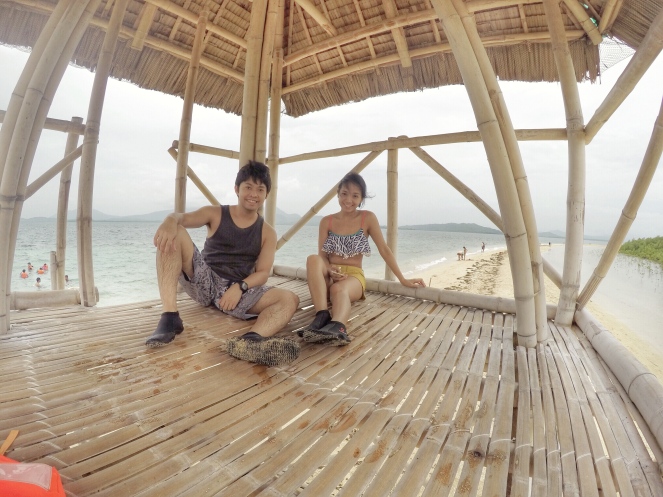 But right when we were about to leave, we saw a girl playing with a starfish. STARFISHHH! We hurriedly approached her and asked if we could borrow it for a while to take pictures. Thank you, ate! She said there were just a few of them at the very end of the island, which we failed to check.

By the way, my messy hair says HELLO! 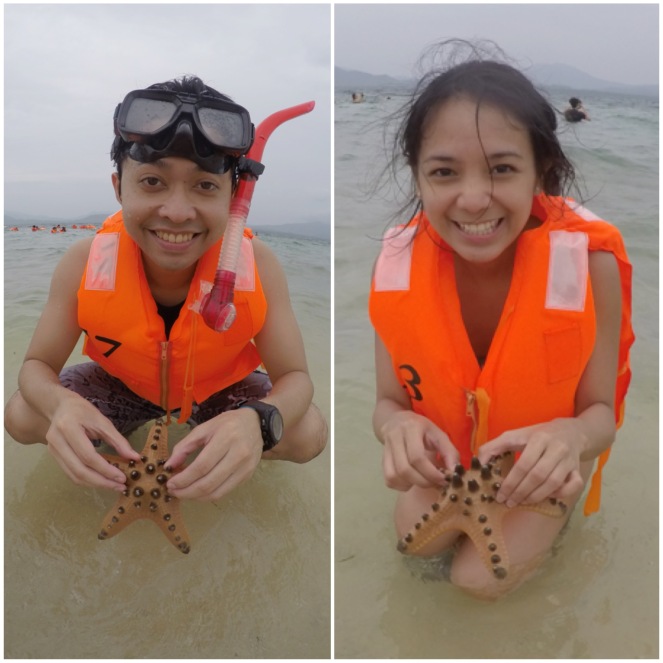 Second island. LULI ISLAND. The LU-lubog LI-litaw Island. It was called such because the island submerges (lulubog) during high tide and appears (lilitaw) during low tide.

Uhhh. Luli Island was pretty similar to the first one that we went to, only bigger. There’s really not much difference between the two. The only things to do were to take pictures, snorkel and feed the fishes. And that’s actually it!

Third island. COWRIE ISLAND. The last island where we got to relax and had our lunch. The food was just okay but enough to satisfy our hunger.

It was a nice day trip but there was nothing spectacular about the beaches. They all looked the same to me.

We awarded ourselves with our much awaited dinner after a tiring day. KALUI! The most famous restaurant in Palawan! There’s sooo many great things to tell about it. Really.

Upon the suggestion of our server, we ordered the KaLui Special of the Day (fish steak, fish roll in coco cream, prawns, eggplant tempura, rice + mixed fruits in a coconut) – good for 2 already. We also ordered Sizzling Seafood Sisig and Lobsters. Ahhhh. Now I know why everyone’s been raving about it. SOLID TALAGA! 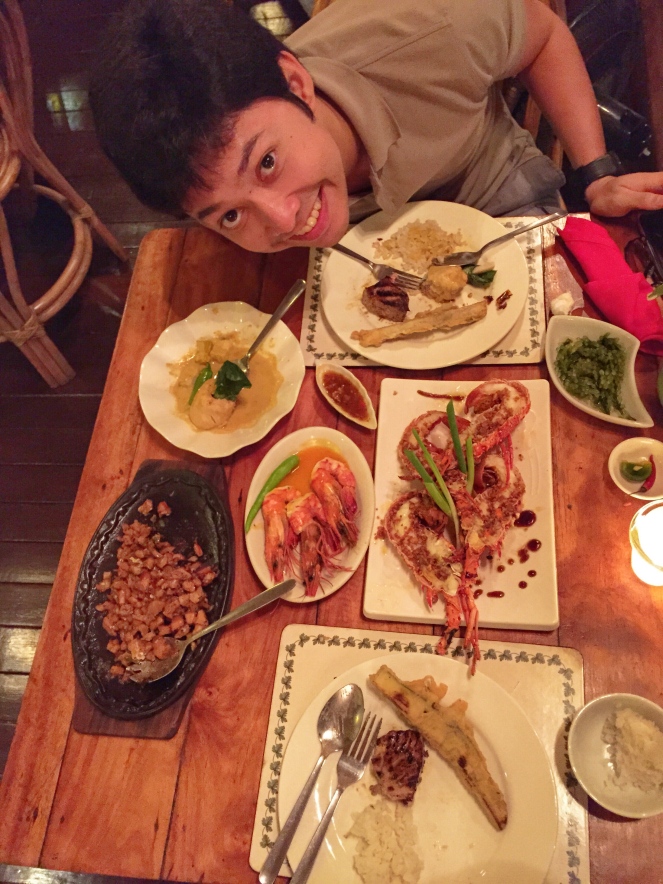 If you are planning to go to Puerto Princesa the first time, make sure to pay KaLui a visit. No buts. No second thoughts. Just go! You wouldn’t regret it!

Oops. Sorry. Just 1 BUT… Make a reservation before you show up, the place always gets pretty busy even on weekdays. Curious yet? 😉 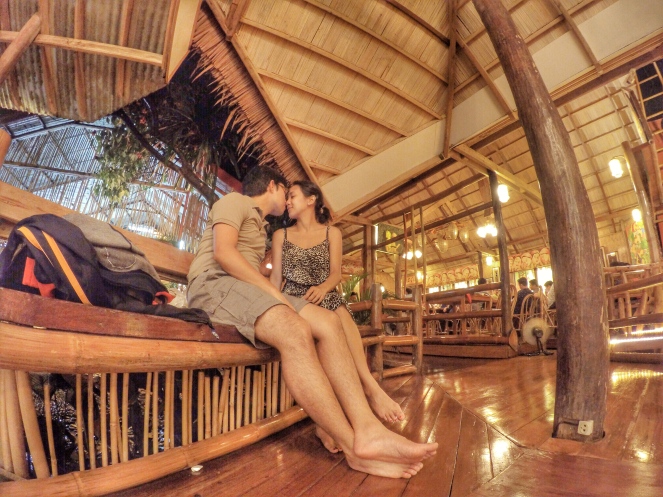 Never leaving Puerto Princesa without seeing this! Finally! I was really happy there was no rain today. Yay! Anyway, I have packed myself with a lot of patience for this trip after hearing about how crazy the wait is, especially since yesterday’s cancelled trips were all moved today.

It was a 2 hour ride from the city proper to Sabang, the gateway to the Underground River. From there, we waited for about 2½ hours (lunch included) before our turn to get on a 15-minute boat ride going to the drop-off beach where the tour will begin.

When we reached our destination, another 1 hour or so to get into a bangka (mini boat) to paddle us through the cave. Sounds pretty boring, eh? Well, instead of sulking we just made the most of it… PICTURESSS! 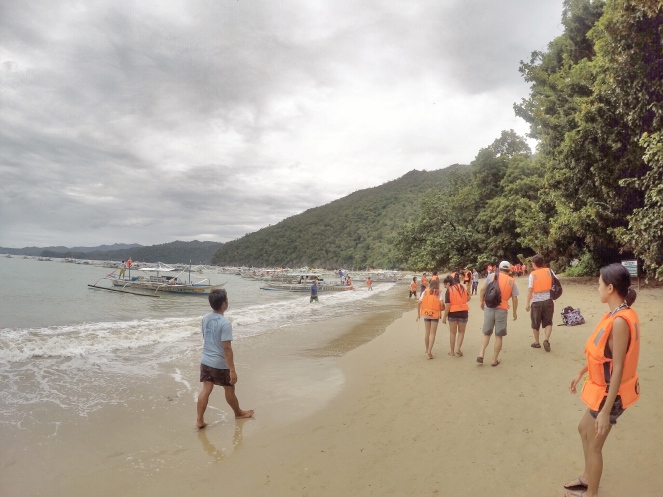 A short trail going to the entrance of the cave. 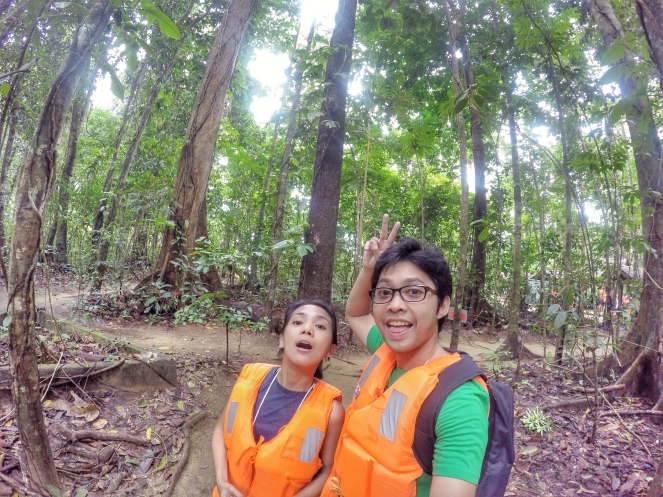 The water was supposed to be greenish-blue in color but because it’s been raining for days, it looked like this.

Sorry, this was how we killed time: making fun of ourselves. Haha! Okay okay, you can skip this part.

Now it was our turn to go in… Look who got the front seats! Woohoo! 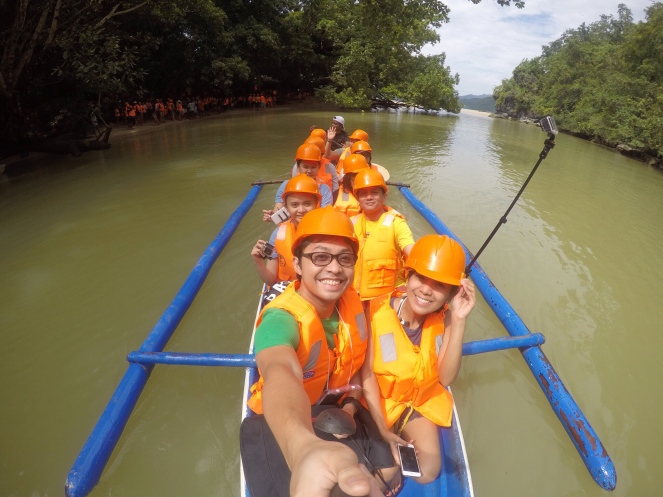 Inside the cave, there were many limestone formations shaped as people, animals, vegetables and a lot more. We actually wouldn’t know they looked like one if the tour guide didn’t point them out.

There were also bats flying around and other scary creatures I wouldn’t dare to know about. But, hell yeah, it was all part of the fun experience! 😉

The tour lasted for about 45 minutes with a witty tour guide who kept us laughing  until the end of the tour. That fast! Imagine waiting for nearly 6 hours all for a less than an hour ride through the cave. Was it worth it? YES! All those efforts we put in was actually more than worth it!

We left the park the same way we went there. Tired but happy.

For our farewell dinner, we walked to the Bay Area for a Dampa experience. Here, you can choose from any of the food stalls lined up where you can buy your own seafood and have it cooked the way you want it. Yummy!

It’s worth visiting if you want a seafood feast for a decent price. 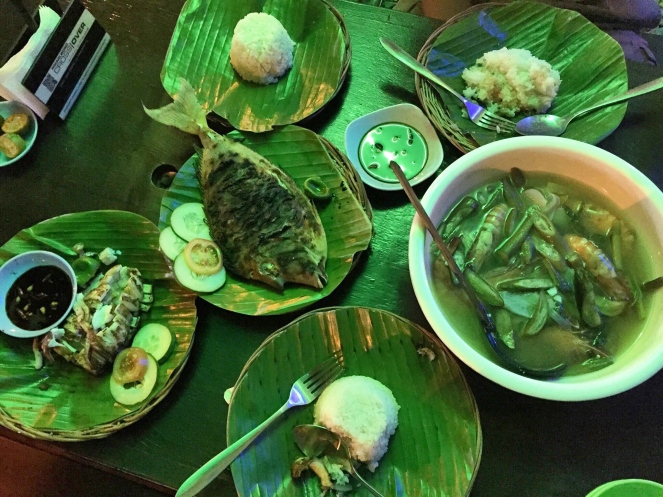 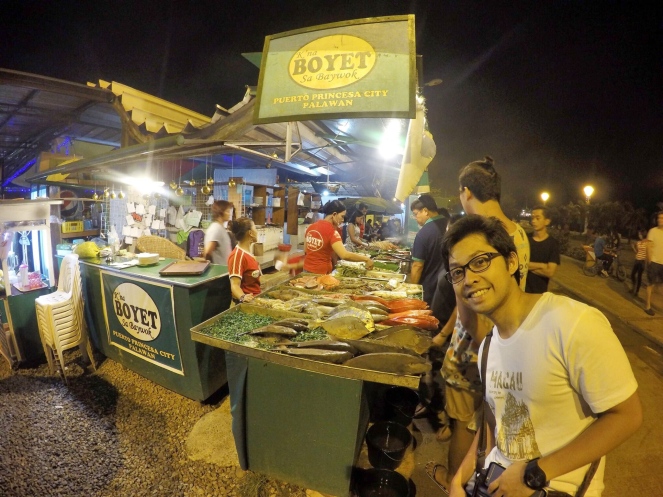 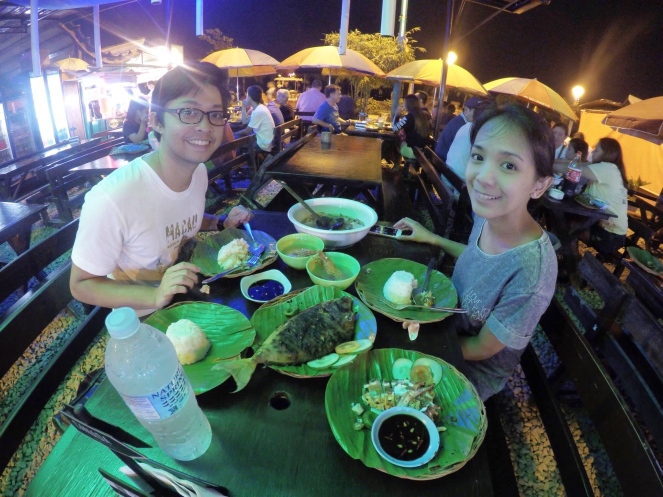 The following morning, our last day, we went back to Baker’s Hill to buy more pasalubongs and to take pictures which we weren’t able to do the previous day.

So… There goes our 4 Days 3 Nights trip to Puerto Princesa. I hope this post inspires you to visit the island soon!